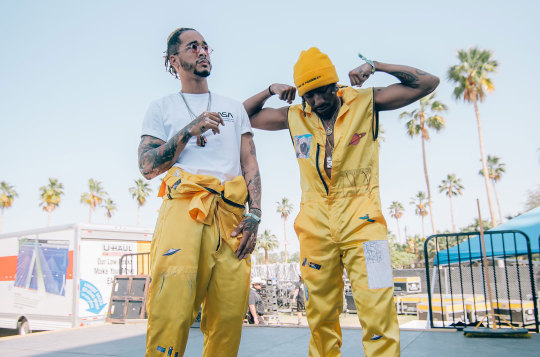 Part of the magic of music festivals is that, with so many notable acts from across the globe within the same city, there is almost certain to be some surprise guest appearances. As Chicago's Lollapalooza is one of the most widely attended festivals in the nation, we here at Ones to Watch had our eyes peeled for those special moments - and we weren't disappointed. The Friday of festival weekend, Ariana Grande dropped a new song called "boyfriend" with Social House, and though the latter wasn't billed for an appearance, they joined Gande onstage Sunday to perform the new release.

Though "boyfriend" is the first time Ariana Grande fans may have seen the name Social House, it's almost certainly not the first time they've heard artists' work. The duo, made up of Michael "Mikey" Foster and Charles "Scootie" Anderson, are responsible for writing Grande's "7 rings" and "thank u, next," two of the most successful singles to release in 2019. Conversely, Grande has recently had a hand in Social House's work, performing backing vocals on the duo's latest single "Haunt You," which is set to appear on their debut EP Everything Changed.

Some of music's sharpest minds operate in the shadows, crafting bangers from some secluded studio for pop's biggest voices. Others take the mantle themselves, preferring to perform hits in under several tons of effervescent stage lighting. And then some do it all. Social House undeniably falls in the third camp. Check out the duo's current repertoire, including its feature on Ariana Grande's latest "boyfriend," before _Everything Changed _drops on Aug. 9.

January 30, 2023 "It's a song about insecurity and vulnerability, about giving a lot of yourself away..."
Author: Alessandra Rincon
pop
maisie peters
body better

10 Questions With Matilde G on Her New Single "Hypocrite"

@onestowatch · 5d
The one & only @injimusicx is getting us out of the winter funk with her latest single "THE ONE.” The new track com… twitter.com/i/web/status/1…

@onestowatch · 6d
Korean singer, DJ, and producer @kraeji is back to reclaim her titles with the first piece of new music she’s relea… twitter.com/i/web/status/1…

@onestowatch · 1w
Wake up babe, @thisisvalley is going on tour!!🫶 With their sophomore album Lost In Translation, set to be released… twitter.com/i/web/status/1…
MORE ON TWITTER