Lollapalooza 2019:  13 Ones to Catch (Who Aren't The Strokes or Ariana Grande)

The moment we have all been waiting for is nearly upon us – who's ready for Lollapalooza? The music fanatics' equivalent to Christmas in August, Lollapalooza is set to fill Grant Park in Chicago, Illinois, starting August 1, with some of the biggest and best names in music for four days straight. We have personally been preparing by taking turns between moshing alone to The Strokes' entire discography and getting over our ex thanks to Ariana Grande's thank u, next.

While Lollapalooza is certainly the spot to be if you want to catch Flume's first set in years or what may possibly be a stop on Childish Gambino's farewell tour, if you do not read the fine print, you are missing out. Lollapalooza's 2019 lineup features a host of not-to-be-missed up & coming artists who you can guarantee we'll be front-and-center for. These are our 13 indisputable ones to catch at this year's Lollapalooza

When & Where: Saturday, 3:45pm at Lakeshore stage

When we say an artist like Scarypoolparty comes around once in a lifetime, we do not say those words lightly. The spellbinding project of Alejandro Aranda, Scarypoolparty became a worldwide sensation after a heart-rending audition for American Idol went viral. Since that fateful audition, the last odd year has seen Aranda finish as the runner-up to Season 17 of American Idol, release his official debut single as Scarypoolparty, and sell out shows across the nation. This is a set and artist not to be missed.

When & Where: Thursday, 2:50pm at American Eagle stage

How to begin describing halfâ€¢alive... a wholly infectious amalgamation of R&B, funk, pop, rock, soul, and so much more all encapsulated under the iridescent reflective lights of an array of disco balls seems like a good as place as any to start. The Long Beach trio quickly became a pop-adjacent sensation after a seemingly one-take video for their single "still feel." mesmerized us and more than 24 million others. halfâ€¢alive is simply one of those bands you have to catch live, and what better a place than Lollapalooza?

When & Where: Friday, 1:50pm at American Eagle stage

With John Mayer taking him under his wing, Alec Benjamin may just turn out to be one of the greatest and most popular songwriters of the 21st century. Referring to himself simply as a "narrator," the Phoenix-born singer-songwriter manages to elevate the seemingly mundane into rich, grand lyrically-driven narratives. Yet, to officially release his debut album, now is the time to catch Benjamin before he is quite possibly the biggest thing on the planet.

Joji's music is an inescapable vibe - there is simply no other way to describe the ominous, space-age R&B of the Osaka, Japan-born artist and producer. A central figure of music collective and label 88rising, Joji stands at the forefront of a new wave of artists. It is a level of previously unheard innovation that runs through the pulsating electronic undercurrents of his phenomenal debut album BALLADS 1 and is sure to carry over into this rare live performance.

Sam Fender is the voice of a generation on the brink. The central figures in the electrifying British artist's records are not lovelorn teens or heartbroken exes, but dystopic nightmares brought about by manmade failings, friends lost to suicide, and the eventual end of the world that seems to be creeping in at an alarming speed. It is not easy casual listening, but it shouldn't be there. There is a pressing nature to Fender's guitar-driven musings, a pressing nature that makes his music feel larger than life yet deeply personal.

Conan Gray is the undisputed king of bedroom bops. First finding his start with nothing more than GarageBand and a bargain mic taped to a lamp, the current state of Gray is one defined by a legion of fans, national sold-out tours, and a polished take on anti-pop that runs the gamut from explosive to deeply heartfelt. Without a doubt the next big thing in pop, Gray is ready to take Lollapalooza by storm, and you will want to be front-and-center for it.

Yeek belongs to an era of artists not bound by genre conventions or norms. The Florida-born, Los Angeles - raised artist weaves together elements of pop-minded R&B, hip-hop, and indie rock to create a hypnotizing concoction of sounds that is just as apt to catch you in a nostalgic bout of feels as it is to open doors to a previously unrealized future. Hot off the heels of his acclaimed  IDK WHERE  EP, Lollapalooza will give you just the chance to catch the magic of Yeek in a setting quite like no other.

To say Lennon Stella has come a long way in a few short years would be a massive understatement. Getting her start covering pop and R&B hits on YouTube with her sister Maisy, the rapidly rising pop starlet is in the midst of joining the same ranks as those superstars she once covered. With only a lone debut EP and a handful of singles to her name, Stella is now racking up streams in the hundreds of millions. This festival may just be one of the few times you can see her before she is packing arenas.

Roy Blair is a name you need to know. Quite possibly the very definition of anti-pop, Blair's music sees him instilling all the emotional depth and unapologetic honesty of sprawled diary entries into the pages of sonically rich hip-hop, R&B, and pop influences. While he has only released a single full-length album, 2017's Cat Heaven, the impressive debut feels like more than enough material, and then some, for a standout festival set. And if we're lucky, this will be one of the few opportunities this year to hear new music from Blair firsthand.

There is a multidimensional appeal to the dreamy sonic musings of Omar Apollo. Blending elements of bedroom pop and idyllic R&B with a relaxed lull that drifts in and out of English and Spanish, Apollo arrives as a star for a new generation. The universal charm of Apollo is only heightened by the DIY feel of the entire experience, as the Indiana native coaxes you further into his dreamscape behind a perfectly imperfect wall of fuzz and textured instrumentation. Now, this is an act capable of whisking up an inimitable groove and dreamlike state in the same set.

Truth be told, we cannot tell you what exactly to expect from a GothBoiClique set, and therein lies part of the excitement. The Los Angeles - based emo rap group formed in 2013 by WICCA PHASE SPRINGS ETERNAL, Cold Hart, and Horse Head paved the way for the modern-day emo rap that now pervades mainstream public consciousness and airwaves. Beyond a set poised to feature the most artists on stage at once, GothBoiClique is a not-to-be-missed affair for any of our sad boys and girls out there.

Blurring the lines between self-aware parody and viral rap phenomena, Yung Gravy is our newest not-so-guilty pleasure. First going viral with the Seuessian smash hit "1 Thot 2 Thot Red Thot Blue Thot" in 2018, the Minnesota rapper returned a year later with a debut album that has no right being as good it is. Sensational, the debut album in question, sees Yung Gravy cementing himself as more than just a punchline but a genuine artist fully capable of turning what could be thought of as a passing joke into an international sensation.

We don't know how many times you will be afforded the opportunity to witness Shaq drop a DJ set at one of the largest festivals in the world. That is all. 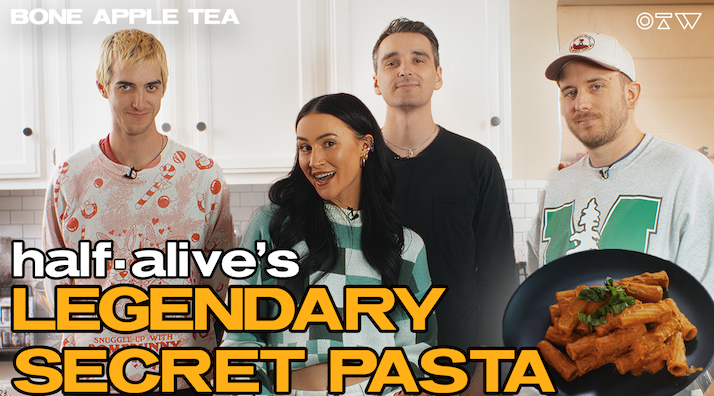 February 2, 2023 Can the boys whip up their legendary pasta or will this be a case of too many cooks in the kitchen?
Author: Ruby Scott
half alive
halfalive
bone apple tea
video