"Summer anthem." The term is thrown around in music journalism and idle conversation with such a reckless abandon that even we here at Ones To Watch are undoubtedly guilty of calling a fair share of songs a "definitive summer anthem." Yet in spite of the arguable overuse of the term, it endures, because what is summer without a said anthem? As we find ourselves in the midst of the summer of 2019, we asked ourselves that very question.

The soundtrack to trips to the beach, twilight escapades, locking eyes at the club, wasting the days away in bed, and so much more - summer is not summer without a soundtrack. So, what single song defines the summer of 2019 for those of us at Ones To Watch?

A great song always feels tailored to the moment, even one as visually hyperbolic as the ocean etched road shimmying alongside the Okinawan Coast. I always love summer songs years after the fact, when they become an ether, inhaled in nostalgia over drinks or gasping laughter, a form of mental "Sanctuary." I can't wait for Joji's earnest vocals to be my one call away, igniting my sonic synapses and taking me back to a hot, languid summer bus ride back from Churaumi Aquarium.

Summer days are waning, real life is creeping in, and keshi's music is here to guide you through the inescapable nature of it all. "summer" is taken from the enigmatic lo-fi R&B artist's recently released EP skeletons and plays out with all the fleeting beauty of watching a firework burn out in the night sky. It is the score to summer flings that are drowned by the fear of what happens when real feelings develop. This is your soundtrack to sad boy and girl summer.

This. This is the song that plays in the background when I lock eyes with my future ex-girlfriend at the day club. 102 degrees. Scorching hot. The woman that'll break my heart in the worst way possible. But hey, it's Summer 2019 and I don't know that yet. I'm just trying to have a good time. But before we start dancing to "Energy," let's get A$AP Rocky out of Sweden.

Featured on the aptly-titled Dawn, SG Lewis' sunrise-illuminated conclusion to a wild night out, "Throwaway" is akin to capturing the very initial spark of summer love. Yet, with that spark comes the fear of abandonment. It is an otherworldly collaboration that perfectly pairs Clairo's ethereal vocals with SG Lewis' immaculate and understated production. Grab your summer fling, look up at the night sky, and make a wish on a shooting star while you hum the melody to "Throwaway."

Two of my favorites decided to collaborate for this sexy number on BAYNK's Someone's EP II, and it contains all the sonic elements that make my heart flutter: sensual and smooth falsetto curtsey of Hablot Brown, subtle electronic enhancement courtesy of BAYNK, and a steady bass foundation that keeps you bobbing throughout. It's the perfect addition to your next pool party DJ set, jor just the thing to alleviate the sunburn at your post-party wind-down. Simmer down, let's go!

Summer is not without its fair share of overcast moments, and Dominic Fike and Kenny Beats' impressive outing is here to give you the perfect sonic accompaniment to those less than perfect days. "Phone Numbers" is for anyone who has ever felt that at-times endless nature of summer can indeed be the birthplace of your loneliest of times, as Fike and Kenny Beats pair buoyant production with wistful lyrical feats. This is a summer anthem that hits different.

This unlikely duo has created a standout track that captures love, heartbreak, confusion, and lack of control all in one. “True Blue” is June gloom; it's crying in the club. The song is filled with anticipation and power. It sets you in a haze that mimics those late summer nights where you contemplate all of your life decisions. This modern yet classic track is drinking banana daiquiris as you catch up with old friends who you have nothing in common with anymore. It's clenching your jaw as you enter new uncomfortable situations in unfamiliar places. It's dancing alone at the party, heartbroken or not, you're alone and you accept it. I won’t be able to listen to this track, or Markson Ronson's stunning Late Night Feelings project without thinking of the summer of 2019.

Zack Fox, Kenny Beats - "Jesus Is The One (I Got Depression)"

Honestly, this song was created as a joke, but that seems to be the theme of hits this year. Zack Fox has been lighting up Twitter feeds with laughter for the past five years. Collaborating with rising hip-hop producer Kenny Beats organically has turned this parody into a viral TikTok hit. Name a better song about depression that came out in the past five years... I'll wait.

"Rosalà­a's "Millionà ria" is the ultimate beach party song. Featuring the singer’s iconic fluttering vocals, flamenco-inspired rhythms, and sun-drenched synths, this track will bring you right back to Barcelona's sandy shores, drinking sangria with all the beautiful Spaniards during your semester abroad. Even if you can't exactly live the lavish lifestyle Rosalà­a depicts in the song (because of, as she says, "fucking money man"), the track is sure to get everybody swinging their hips at your local barbecue, pool party, or summer soirée. Be sure to reapply your sunblock, because this song of the summer is extra hot.

Let me ask you: You are poolside drinking and "Givin' Up" comes on. What do you do? If it doesn’t get you dancing you’re most likely drowning in sadness, or just drowning in general. Can we get a lifeguard, please? Either way, saxophone summer is here and Emarosa’s leading the charge.

-Jimmy Smith, Editor of our sister site The Noise

With Hot Girl Summer in full-swing, Mahalia is bringing the perfect summer breeze to cool you down. "Simmer" sees the rising UK artist linking up with Nigerian star Burna Boy to deliver a track that balances a fervent passion with an effortless cool. Sampling Jeremy Harding's infamous dancehall anthem "Playground Riddim," which was, in turn, most famously sampled on Bennie Man's "Sim Simma," "Simmer" is the theme song to your Hot Girl Summer.

Admittedly, "100mph" is a track that was originally conceived by Prince sometime in the mid-'80s. However, with this summer's posthumous release Originals, we catch a glimpse of the tracks that didn't quite reach the Purple One's perfectionist standards at the time. After an intro that can only be described as "triumphant cheese" Prince snaps into one of his most infectious melodies to date. Accentuated by a staccato vocal harmony, ripping snares and a bassline that you can chew on, this track brings the funk to the summer of 2019 like no other release I've heard yet this year. If this is not a summer vibe, I don't know what is.

Within just a few seconds into “Honeypie,” I could already predict that I’d be obsessed with this indie-funk masterpiece for months to come. Fast forward to two months later, and I still have this infectious tune on repeat well into the summer season. Not only does Johnny Utah gift us with his feel-good falsetto, but he crafts otherworldly funky pop melodies that’ll have you dancing (or chasing your honeypie) in no time.

Dreamville or TDE? Dreamville or TDE? Why not Dreamville and TDE? While we constantly try to compare the two, "LamboTruck" shows that these two can play nice - except for REASON threatening to rob J.Cole. You won't be hearing this in the club, but it's my song of the summer because it packs a punch and shows you how who's up next in the rap game. After you bump this song, might as well go listen to all of Dreamville's Revenge Of The Dreamers III.

Who hasn't fallen down the rabbit hole by falling for someone... and no better time than summer to dive into something new, or realize that you're already under the spell of a "sweet poison" and may need to get out immediately. PVRIS struts into this track woke to the precariousness of having such awesome yet powerful feelings. All wrapped up in a power anthem about becoming powerless, PVRIS gives us an outlet for the war between head and heart that we've all felt. It is a war that only gets worse at night, that we all fight, and that fvcks with our sense of wrong and right.

My pick is off of Doom Days, Bastille’s latest concept album which chronicles the various stages of the night. "Nocturnal Creatures" captures the thrill of being free of the stresses and responsibilities of the day to experience what nighttime has to offer. The song is perfect for a late, summer night drive as frontman Dan Smith melodically entices listeners to take control of the night and make the most of the few hours of freedom.

Well, my boss keeps blasting this from his office so that must mean it is a summer banger! The infectious project of five high schoolers out of New York, LAUNDRY DAY surely knows a thing or two about capturing the timeless energy of summers spent running around with friends, dreading the day when school rolls back into session.  "CHA" is summer youth encapsulated. 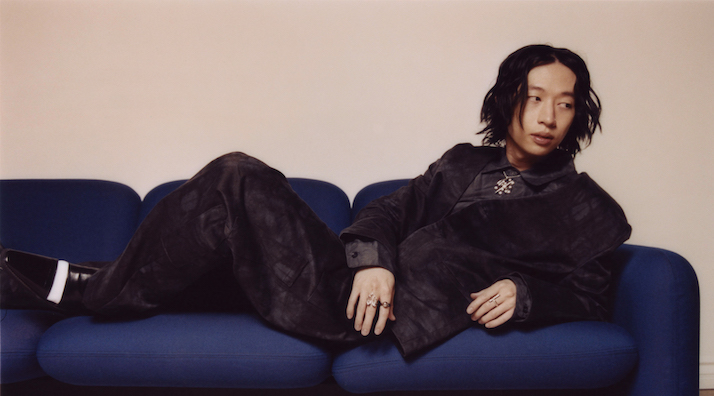 March 28, 2022 "It's an album that I hope is candid, varied, and one you can come back to again and again."
Author: Maxamillion Polo
pop
R&B
album reviews
keshi
gabriel

We Need to Give "Elliot's Song" a Chance, Okay?

@onestowatch · 1d
The one & only @injimusicx is getting us out of the winter funk with her latest single "THE ONE.” The new track com… twitter.com/i/web/status/1…

@onestowatch · 2d
Korean singer, DJ, and producer @kraeji is back to reclaim her titles with the first piece of new music she’s relea… twitter.com/i/web/status/1…

@onestowatch · 4d
Wake up babe, @thisisvalley is going on tour!!🫶 With their sophomore album Lost In Translation, set to be released… twitter.com/i/web/status/1…
MORE ON TWITTER